Skip to content
Home Game VNG General Battle officially “landed” in the Vietnamese game village, with a good general and a series of super terrible Vipcode 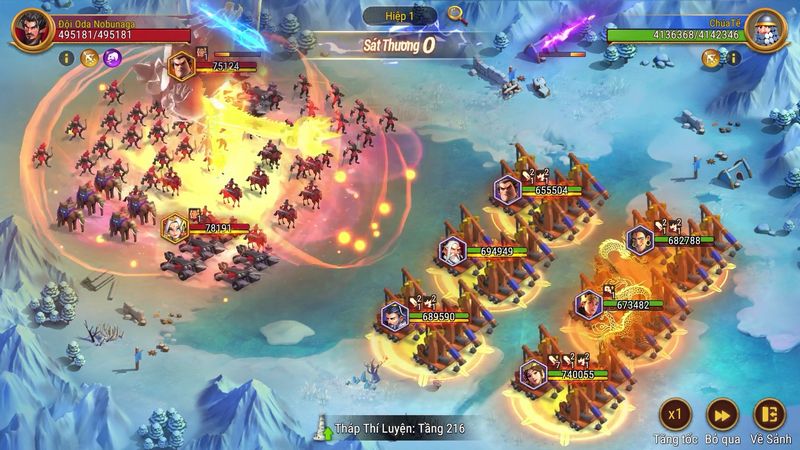 According to the schedule, at exactly 9 a.m. on August 22, the game Fighting Generals VNG was officially launched in Vietnam market. To celebrate this event, the publisher also specially gives the gaming community countless “terrible” Vipcodes.

General Battle VNG (English name: King of Nations) is a multinational tactical chess game with official copyright from JYXS Games and published in Vietnam by VNGGames. Inspired by ancient civilizations with a diverse system of soldiers, the game allows players to participate in intense battles with a series of combat modes and unique features. As can be seen, VNG General Battle creates an attractive playground for the group of players who love the genre strategy game.​

To have a complete experience with VNG Generals Battle, let’s find out some of the special features of this game through the rich civilization system, vivid gameplay and “terrible” incentives for players. .

Unleash your troops in battle with multinational generals

Thanks to the diverse combination of civilizations, VNG Generals Battle becomes a battlefield where gamers can enjoy epic battles with attractive appeal. Inspired by six civilizations that once prospered, the game allows warlords to freely combine different military systems to create the most ideal squad. In particular, the Vietnamese God General Long Vuong – Tien Mau will be exclusively featured in this unique game. Moreover, not only has a super light capacity (only about 400MB) – suitable for the configuration of all mobile phones, but VNG General Battle also owns high quality ingame images and sounds. The attraction of skill effects, combat movements as well as the sound of soldiers’ cheers and cheers in VNG General Battle is completely enough to help gamers integrate into the battlefield atmosphere.​

Experience beyond expectations with a series of great features

Contributing to the appeal of VNG Generals is the rich combat modes, allowing players to practice their skills in the most comprehensive way. The first are the campaigns of the Expeditionary Expedition and the 2000-storey Test Tower with increasing difficulty, constantly challenging gamers and accompanied by attractive rewards. Moreover, VNG’s PvE mode also has a World Boss Battle feature – a rare special feature for the strategy game series.​

In addition, the real combat element in PvP from VNG General Battle contributes to creating breathtakingly dramatic battles. Here, the lords will enter a “brain balance” competition with many squads of different opponents to win the rewards and titles they deserve. Flexible strategic thinking through recruiting heroes and arranging suitable generals. The fighting forms in VNG General Battle do not only stop at direct confrontation but also follow the faction or follow the Legion, thereby reflecting the true strength, skills and qualifications of the lords. It can be said that this game is the perfect venue for gamers who love skill-based and tactical gameplay.

With an unlimited number of Vipcodes, all gamers who register and complete the correct and complete steps will receive this valuable gift. With a simple way to participate, the event is “warming up” the community on the occasion of the launch as well as providing the opportunity to “invit” friends to experience the fiery multinational battle at VNG Generals Battle.​