Birmingham couple saw the mesterious lights while they were driving on the M6 between Liverpool and Manchester.

Birmingham couple saw the mesterious lights while they were driving on the M6 between Liverpool and Manchester.

At around 6.45pm on November 18, Kelly Thompson and her boyfriend Stuart Marshall, 35, were on a weekend getaway in their caravan. They claim they were baffled by astonishing array of lights in the night sky which appeared to be heading to Stoke-on-Trent.

Kelly expressed her apprehension regarding UFOs in general.

“We were just driving and saw these weird lights in the sky, I couldn’t really explain it”, Kelly told the Liverpool Echo.

“At first I thought it was something projecting into the sky from the ground but I kept looking everywhere and couldn’t see anything.

“When then drove directly under them and I took pictures because I couldn’t explain it. I was baffled.

‘UFO’ spotted above a Greater Manchester hospital on April 22.

“I was in the car with my partner and he could see it too and was wondering what it was.”

“I started trying to Google what I had seen, but it’s hard to put into words, you know.

“I googled UFO sightings but that wasn’t helpful at all. I also spoke to my friends about it and the first thing they said was ‘oh, it’s a UFO’, but I’m on the fence with that kind of thing.”

She went online to see if she could figure out what was causing the celestial spectacle.

It turns out that she and Stuart saw a satellite pass overhead, though this has yet to be confirmed.

The coupe are ens route to their caravan in North Wales, when they spotted the strange illuminations.

In addition, at the time the couple was on the motorway, one SpaceX Starlink satellite heading over North Wales towards Stoke-on-Trent, according to Live World Map of Satellite Positions. 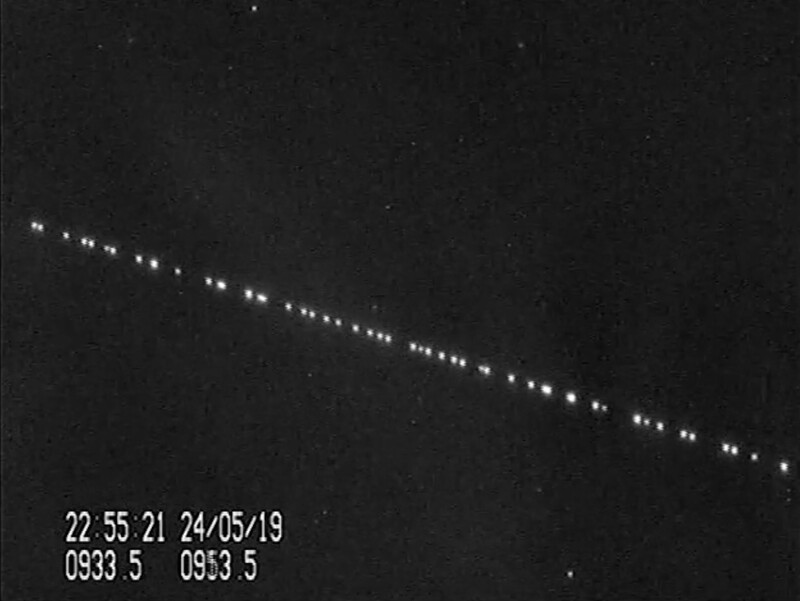 The satellites, which were launched by billionaire Elon Musk, are known to be visible from the ground at night and in the mornings, but they normally look like a long chain of dots.

However, it’s not the first time “strange lights” were seen in the UK. On September 27, ‘UFO’ seen by hundreds of Scots. The strange light was seen in Fife, Stonehaven and Perthshire and as far south as Shrewsbury, Shropshire.

It was seen above the Lidl in Seaton, Aberdeen.