A dog is known as a man's best friend because he will go to great lengths to secure his master's safety and well-being.

There have been countless instances of human-dog camaraderie, but the most recent one in Saudi Arabia will make everything else seem so small. It will both astonish you and make you cry joyful tears.

A stray dog saved the life of a three-day-old newborn girl who had been abandoned in a trash can by her mother. The story was published by Saudi Arabia’s daily ‘Sada,’ which included stunning photos of the dog carrying the infant in his mouth.

According to the daily reports, the dog was hungry and wandered the streets seeking for something to eat, but he came up empty-handed. It spotted a newborn with the umbilical chord still linked to her body.

And what it did next showed not just the dog’s sensitivity to humans, but also why it is known as a loyal animal. 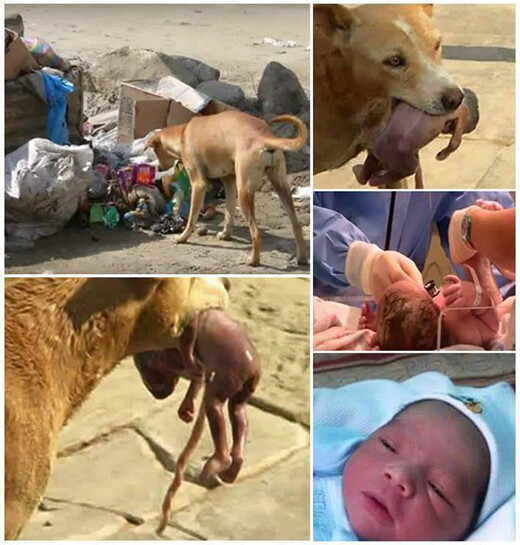 The dog was aware that the infant was not doing well, so he made certain that the newborn did not suffer any additional injury. He took the baby in his mouth and carried her away from the dangerous streets in quest of safety.

According to the newspaper, he brought the baby to the neighboring residence and placed her on the doorstep.

Following the dog’s constant barking, the housemates saw the newborn baby’s dreadful condition and hurried her to the hospital. According to the latest reports, she was doing Well now and had only a few minor bruises.

After images of dogs and infants went popular on social media in the Gulf area, the Saudi daily picked up the story. However, the specific location of the incident remains unknown.

This stray dog’s actions are nothing short of amazing; after all, he saved a human life from the jaws of death.

The dog was hungry, and the baby’s condition was critical; he could have easily eaten the human baby to satisfy his hunger, but he chose to put his own needs aside in order to save the newborn’s life.

Let’s only hope that after all that hard labor, he received some food.