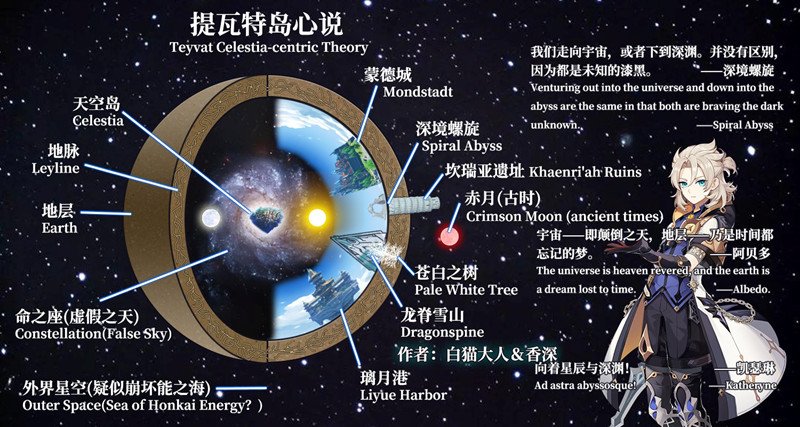 An extremely crazy theory about the land of Teyvat, and the gods.

Celestia has always been a mystery since Genshin Impact was released because it is related to a lot of events in this game. Besides, the collapse of Khaenri’ah also more or less related to the wonderland that reigns in the sky of Teyvat. And among the numerous theories surrounding Celestia, some emerge that are extremely worth considering. Among them, there is a theory that the world in Genshin Impact is a world reversed and controlled by the person behind the Celestia.

According to this hypothesis, Teyvat is a world of “bugs” created by the gods to control mankind. The people of Teyvat continued to live without knowing the falsity behind the curtain, while the inhabitants of Khaenri’ah inquired and discovered the truth about the world in which they lived. As a matter of course, the gods punished Khaenri’ah for their discovery. Complementing this theory is a map posted on Hoyolab with images depicting the world of Teyvat in the game, where Celestia – the land of the gods lies deep in the core. Judging from this map, La Hoan Tham Canh is the entrance to Khaenri’ah. This mystery is described as the ruins of an “underground city”, and Albedo’s story describes Khaenri’ah as an underground kingdom.

However, if Luo Huan Shen Jing leads us underground, why does the sky look like we are in space? Perhaps, the stars in the sky of Teyvat are fake, they are simply artificial things lying inside a world reversed to the core. Scaramouche told the traveler that “the stars are lies” when he met them at Musk’s Range – the entrance to La Hoan. Besides, the plot of Genshin Impact is also inspired by a lot of different myths, cultures and beliefs and this reversed world is completely grounded to believe in.

If you’ve ever played Persona 5, “Demiurge” or “Falling God” is something you may be familiar with. Demiurge is also derived from GnosticismThis theory refers to a set of ancient religions of the past. In it, there is a Demiurge whose mission is to maintain and protect the resources of the universe. And if this game is inspired by Gnosticism, then it is possible that the Celestia are being controlled by entities like Demiurge. According to this theory, the fallen gods wanted to create and maintain a false world and punish humans with iron fists. So, according to this theory, Teyvat was the land of “bugs” created and controlled by the Celestia, and Demiurge was behind controlling them. The people of Khaenri’ah knew this, and they tried to escape the trap that kept them. That’s why they were punished by the Celestia. Demiurge ordered the Celestia, thereby using the gods to destroy this nation, turning the people into ugly monsters to prevent them from telling the truth to all of humanity. That is also the reason why La Hoan Tham Canh has a way to go against Celestia, so that the people of Teyvat can escape from the fake reality that exists before their eyes. So, what do you think about this theory?