We use your sign-up to provide content in ways you’ve consented to and to improve our understanding of you. This may include adverts from us and 3rd parties based on our understanding. You can unsubscribe at any time. More info

Liverpool won’t sign Matheus Nunes from Wolves this month as the midfielder wouldn’t be able to play for the club until next season. Nunes put pen-to-paper on a deal at the Molineux in August after leaving Sporting Lisbon.

Liverpool are desperate for midfield reinforcements after whimpering to their fifth Premier League defeat of the season at the hands of Brentford on Monday night. The Reds were missing Jordan Henderson through concussion for the encounter, while Fabinho and Thiago struggled to get a grip on the showdown.

Jurgen Klopp’s team have been long-term admirers of Nunes and were said to be chasing him before his move to the Black Country. But FIFA regulations say a player can only play competitively for two clubs in one season, which means Liverpool would have to wait until the start of the next campaign to see him in club colours even if they could thrash out a deal with Wolves before the current transfer window closes.

Nunes made two appearances for Sporting at the start of the season before leaving Portugal. And the 24-year-old has gone on to feature 16 times for his current employers, with 14 of those matches coming in the Premier League.

Liverpool have been tipped to move for Wolves ace Matheus Nunes (Image: GETTY)

According to The Telegraph, the Reds are exploring the possibility of signing Nunes for £44million. But if they are successful in their endeavours, the player would likely wait until the end of the season before he transfers to Anfield. And that would allow him to get plenty of minutes under his belt for Wolves between now and May.

Nunes has struggled with injuries this season and has only shown glimpses of the form that brought him to the Reds’ attention while he was at Sporting. The ace was part of Portugal’s World Cup squad in Qatar but only started his country’s group game with South Korea as the European team were beaten 2-1. 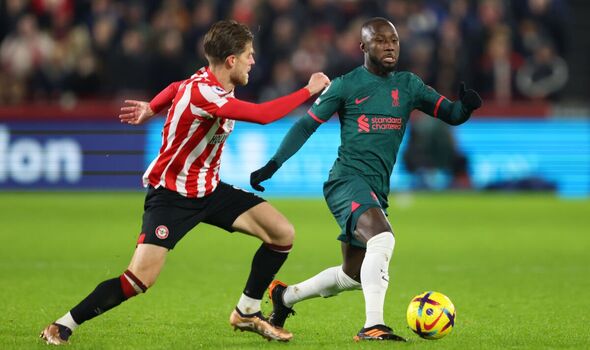 Liverpool were beaten 3-1 by Brentford in the Premier League on Monday (Image: GETTY)

Liverpool have been in dismal form since the start of the campaign and have fallen to sixth in the Premier League table after losing five matches. Ahead of the break for the World Cup, Klopp’s side lost to Nottingham Forest and Leeds, before beating Tottenham and Southampton.

With north west rivals Manchester United picking up form and Newcastle showing signs of becoming top four regulars, Klopp will need to solve a whole host of issues if he is to guide his club back to the Champions League next season. And earlier this week, legendary defender Jamie Carragher said: “If Liverpool think they can get top four without signing a midfield player in this window, they’ve got absolutely no chance.”

According to Relevo, not only would Manchester United pay the transfer fee, but they would also cover the remaining portion of the Portugal international’s salaries for the duration of the season. This information was obtained from a source close to the situation. On the other hand, the contract would not include an option to рurchase him on a more permanent basis throughout the summer.