SPACE nerds reckon they've discovered life on Mars - after spotting a 'CRAB' in a photo taken on the red planet. 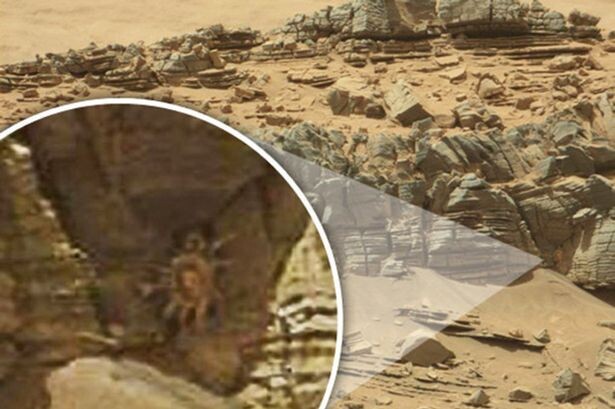 LIFE ON MARS: Eagle-eyed space fans claim to have spotted a crab-like image on the Red Planet (Image: FACEBOOK)

Conspiracy theorists say they now have concrete evidence that the martian rock is home to life, just like Earth.

And they say the alien “crab monster” proves it.

In the past, scientists have claimed aliens do exist and are likely to look just like humans.

This week, Conspiracy Facebook Group Journey to the Surface of the MARS posted the awesome photo and named the creature a “cave guard”.

A zoomed-in image appears to show a crab-like creature with at least eight legs and a claw.

Commenters argued that the creature looked like a scorpion while another compared it to the ‘face hugger’ from the Alien films starring Sigourney Weaver.

The group has shared a series of images taken on Mars which it claims shows life exists on the planet.

In the group’s ‘information’ section it reads: “They will not tell the truth about MARS…”

It’s not the first time a group has argued that life exists, or existed, on the Red Planet.