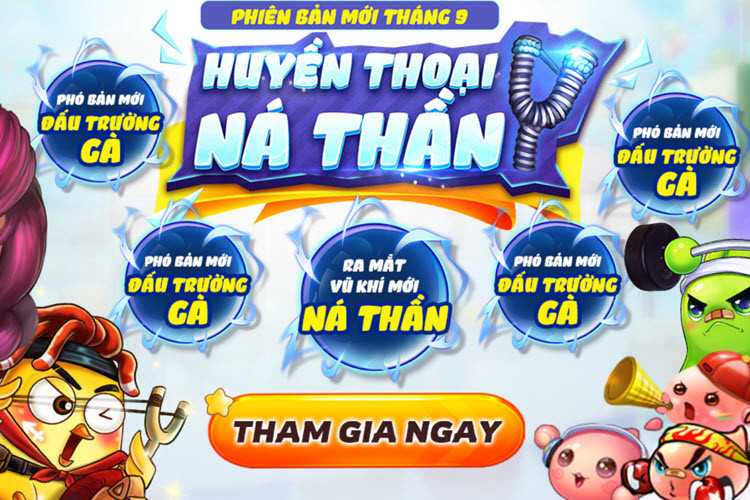 Released on the occasion of National Day, the September version of The Legend of Na Than really satisfied the Gunny Origin community because it was free to experience the new version, the chicken arena as well as discover new optimizations from the game.

The September version name is also the new weapon appearing in Gunny Origin. The Legend of Na Than officially landed on Chicken Island from today – August 31.

Gamers can participate in both individual versions and group copies. Each form of clone has 4 stages with different difficulty, upgraded from 1 to 4. This is considered a copy system with significant difficulty through each stage, gamers will have to be careful and flexible in the process. each mission to conquer. To pass all the stages, in addition to strong weapons, gamers need to show fighting skills, smart moves to avoid unnecessary damage.

Time-limited copy of the difficulty level

Is a form of clones for characters with high star level, competing in a certain number of rounds and having their own rules for each clone level. In this September’s new patch, Gunny Origin introduces Gold Collector, Skill Escape, Fusion Engineer, Jewel Unearth, and Empowered Stone Special Agent maps. The most challenging in the limited edition is conquering the difficulty of each map. Gamers must be very flexible and sensitive in how to set up weapons as well as move to smoothly overcome each difficulty in these maps.

The entrance is located at Master Lobby – Golden Lobby. Simply ask each other to receive rewards (maximum 5 times/day/character) but this “hearing” place only spends the top 3 inter-server fighting forces, allowing other players to make inquiries and receive rewards. With each “listening” there will be a corresponding effect or comment. If in a week, the character reaches 500,000 likes will receive the title of Ten Thousand Admirers (7 days). This update is quite interesting, promising to bring many expressions and discussions of Gunner.

The new weapon Na Than is a legendary weapon that gamers are waiting for these days. A series of attack, defense, agility, and luck stats all together with +15 to count significant strength for the character. Adding a weapon makes Gunner’s game more interesting and thrilling. Let’s wait and see if the Legend of the Gods will make the TV, Refrigerator, Lu Brick, Thunder, Cannon, Grenades, etc. or will it be a well-balanced battle between modern weapons and group of weapons. classic?

Also in the September version, Gunny Origin also opens a level 50 limit, a new main quest and allows gamers to shoot bubbles to receive extremely hot gifts from the Bubble Arena. These are also activities worth experiencing in the coming days.

With new features and attractive benefits, Gunny Origin believes that the experience journey of gamers will have many interesting and unexpected surprises during this great holiday. Besides the new version, the game is still regularly implementing community tournaments, semi-professional tournaments and fanpage playgrounds for gamers to get closer together and stick with the game longer.