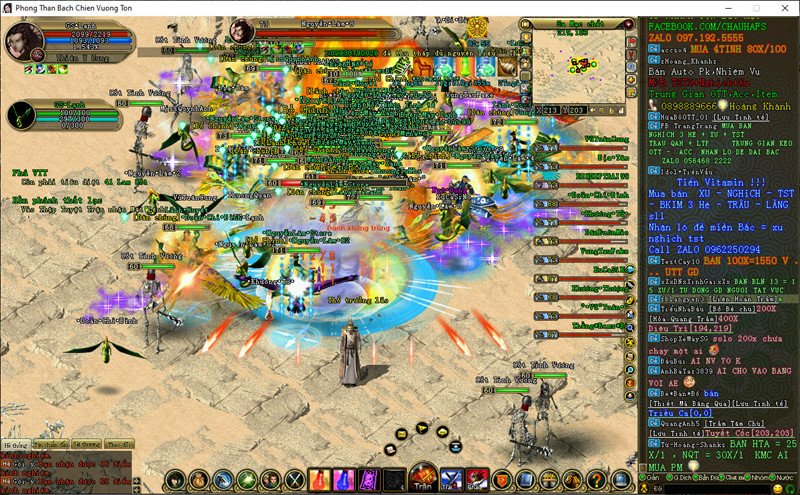 Within the first few hours of launch, players flocked to Thien Y Cung and were extremely satisfied with the streamlined server just like the day before. This large number of players proves Phong Than’s 16 years of quiet but steady existence.

The new server Thien Y Cung officially docks on August 26, is the last server of 2022 to recreate the nostalgic gameplay, feature system and streamlined sect like how Phong Than once stormed the world. gamers of the past. Players are present in every playground of the new server, from the brutal Thuong Chu and Manh Tan battlefields, the thrilling Van Tien Battle to the bustling and crowded boss hunts. On the first day of its launch, Thien Y Cung created a good effect with an enthusiastic reception from players. They actively encouraged each other to experience the game and discussed enthusiastically in the community group.

It’s been a long time since there was such a lively Manh Tan!

The most exciting of the activities to celebrate the new server is the feature of stealing wages and salaries at the Manh Tan battlefield, which takes place dramatically throughout the day and night. As the land of fiery PK battles, gamers often come to Manh Tan to demonstrate their high martial arts skills with the Three Realms. At Thien Y Cung’s server, it was difficult for the salary trucks to go to Manh Tan to cross the border, and there were continuous battles between the two parties to steal wages and salaries. Players were engrossed in chasing each other until late at night, the remaining group watching through the livestream screen was equally enthusiastic. Witnessing the land of Manh Tan constantly coming in and out, gamers must say: “It’s been a long time since there was a server that Manh Tan is so busy!”. It can be seen that the transport feature brings hours of suffocating competition, stimulating the fighting spirit for the chess world to maximize their strengths.

Server Thien Y Cung has really brought a new source of energy to the Phong Than gaming community. Players seem to once again relive the memorable moment of youth, when the whole community is intimately attached to each other because of the same love for the compact but attractive fairy game.

16 years is a relatively long journey, especially in the context of the ever-changing and innovative Vietnamese game market. This is a challenging period of existence but also reaping many “sweet fruits” of Phong Than. To do this, the game has always captured the changes, updated the new version continuously every year, creating novelty and many playgrounds for gamers at each level. The recently released new version of Bach Chien Vuong Ton has brought positive effects. This new version has continuously updated attractive features, facilitating the player’s journey to join the new server, including: New Thuong Chu, New Beast, New Boss Hunt Map Nien Beast,… Any gamer can join the boss hunt at the right level with the multi-level expansion playground feature to bring the best experience to players. This is also an opportunity for the nobles in the game Phong Than to earn valuable items when hunting bosses.

The highlight of Bach Chien Vuong Ton is the new feature Bach Tric, players will be transformed into ethnic people such as Xiuu, Xuan Vien, Shen Nong, Human Toc, Ma Toc, Long Toc, Yaksha Tri… Each clan will possess different cultivation methods, which increase combat power and personal skills. In addition, when participating in the Wilderness Trial, Collecting Geniuses of the Earth, or Guardian of the Essentials, the character will increase in rank from the Sign Disciple, Outer Sect Disciple, Inner Sect Disciple, Deacon. .. to the Patriarch Exploring.

The battlefield of Thien Y Cung and the battlefield of Bach Chien Vuong Ton are eagerly waiting for the participation of the nobles. Join the Phong Than community to relive the beautiful war game memories and hunt for the famous precious treasures of the Three Realms