Despite many scandals, Tower of Fantasy has received a tremendous amount of pre-registration before the release date has yet to come.

Less than 3 days left Tower of Fantasy will officially be released a global version and the Vietnamese gaming community will also have the opportunity to experience one of the extremely powerful competitive role-playing games with the current Genshin Impact.

Before the server of Tower of Fantasy Officially launched globally, this game has recorded a record number of pre-registered gamers, surpassing 4 million registrations. This number has also surpassed the game publisher’s expected milestone to more than 1 million turns, promising an extremely successful launch of this game.

Present Tower of Fantasy is still one of the games that attracts the most attention right after the official launch date is announced, because of that, a series of gamer groups constantly have posts related to this game. Of course, there are quite a few controversial opinions on issues that Tower of Fantasy encountered since its publication to the present.

Despite possessing its own special features compared to competitors Genshin Impact but the gaming community still discovers a lot of things that belong to super products Hoyoverse right inside the Tower of Fantasy, more or less.

Of course, this is not the first time that a game has brought elements related to Genshin Impact like that, but the inclusion of too many images of Hoyoverse home products makes many gamers feel “itchy”. . 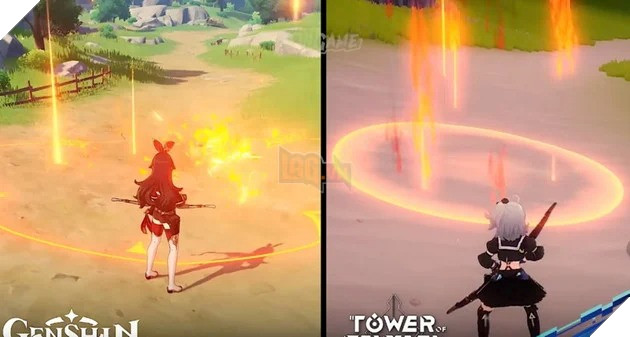 It is not yet known if the launch date of Tower of Fantasy will really have the expected success in the international market, but given what this game is achieving, it is certain that the product’s release date will be released. The product from Perfect World will definitely be spectacular.