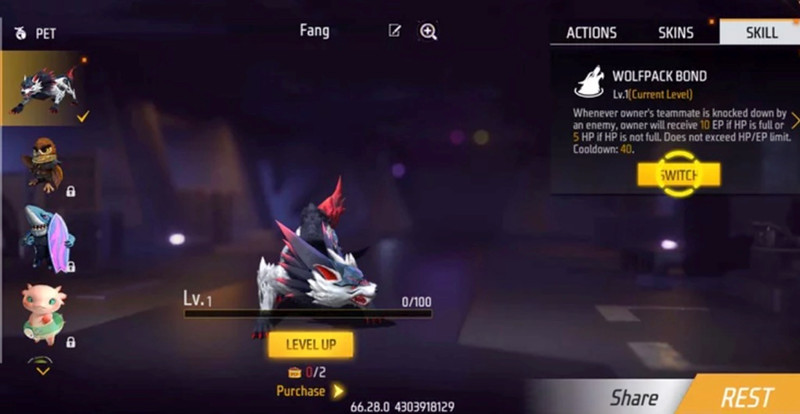 Free Fire OB36 will bring some of the latest QoL features to gamers.

The Free Fire OB36 Advance Server has been opened and many players who have received the activation code can download the client from the official website. There are many new features in the beta update – and in this article, JustbartaNews will introduce the 5 most notable features.

However, some features will not be added to the official update.

The skill is like an Active version of Joseph’s ability. When activated, the player can move at lightning speed for half a second, with a cooldown of 40 seconds. The skill will cooldown 2 times and can be used twice in a row (5 second cooldown between casts).

The new pet in OB36 will be a wolf named Fang, with the passive skill Wolfpack. This skill will allow the player to recover 10 EP or 5 HP. when a teammate is defeated. Cooldown is 40 seconds.It can be said that Fang’s skills are not really strong. It’s useless in solo modes, the regen bonus is too small and your team doesn’t show up when activated. It is extremely useful in the final teamfight, when the two teams fight in the final round, but the situation is too suitable to plan your pet squad.

This is a new feature that can be added to Free Fire OB36, allowing players to engage with other players in different activities and make friends.

There will be minigames about points of interest like the track, soccer field, boxing ring and more. This allows users to entertain themselves outside of battle, all within the BR.

Climb aboard the Airship

A new Airship has been added to BR mode in Advance server’s OB36. This ship moves from place to place, and the player cannot shoot it down while on it. By climbing on this airship, players will be able to get various high-class loot.

This could be a feature borrowed from other BR games like Apex Legends.

Library feature in the weapon section

Garena will be adding a new Library feature to the Weapons section. It can be used by players to showcase their arsenal in the game, based on their rarity, type, and more.