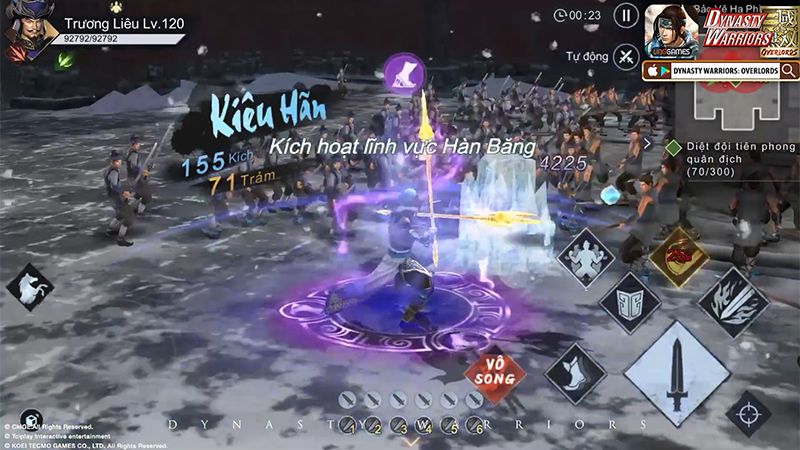 Dynasty Warriors: Overlords gamers are extremely interested in the generals system and constantly learn about how to raise heroes to pass the task smoothly.

Exclusively released in 4 markets Vietnam, Thailand, Indonesia and Philippines, Dynasty Warriors: Overlords Bringing a happy Hack & Slash experience on the “one pound one thousand” battle, players are free to roam and show off their remarkable martial arts skills.​

A plus point of Dynasty Warriors: Overlords makes players immersed in the world of Three Kingdoms Dien Nghia is a diverse system of generals. When possessing a certain collection of generals, players will have to go through real brainstorming stages to calculate the raising and use of champions. This is a topic that always attracts attention on community groups.​

The general system in Dynasty Warriors: Overlords is quite diverse. Players collect generals mainly through the feature of recruiting with Gold (Kim Nguyen Bao), also known as “roll” or “spin” champions. Each recruit will appear a random champion of low to high quality, R (Green), SR (Purple) and the most advanced is SSR (Yellow).

After each recruitment wave, players can review the General Book feature – where the generals have been “rolled” and unlocked to increase the fighting force for the entire squad. If you accidentally recruit an existing champion, this can be counted as a form of collecting champion shards to upgrade that champion.​

Players will receive free spins and accumulate Gold to recruit champions through quests or daily activities. Not only dividing generals by quality, the general layout in the game is also based on Wei, Ngo, Thuc, Quan and Tan countries. Players should own at least 3 generals from the same country to coordinate the team well and bring more significant attack efficiency. In some missions, the player is assigned to bring a champion from a certain country to go to war, otherwise, he will have to give up the mission and proceed to “roll” the champion again.​

With a game that is heavily invested in storyline like Dynasty Warriors: Overlords, it is extremely important to collect a variety of generals

On groups, gamers constantly ask questions related to raising champions and setting up the optimal squad. Mainly posts asking for advice on whether to continue using the champion they just “rolled” or not, gamers hope to save time and invest reasonable resources for the “successful” champion. out”. Most players are advised to raise champions if they want to build a strong faction-based squad or raise champions with high tanking ability to preserve strength when going to war.​

Many gamers have worked hard to do overview analysis, specifying when to upgrade champions and how to use the charm feature. The player community expressed their appreciation for the articles that were both clear and easy to understand and accurately reflected the problems they were facing in the game. Mindful players show an extremely thoughtful and enthusiastic investment in champion training, they are cohesive and ready to support each other towards the best game experience.​

In addition to the attractive gaming experience inherent in the role-playing action gameplay, the game also opens up opportunities to interact with foreign gamers. In the coming time, Dynasty Warriors: Overlords promises to continue to fascinate gamers with a series of activities to help increase character welfare as well as upgrade the gaming experience.