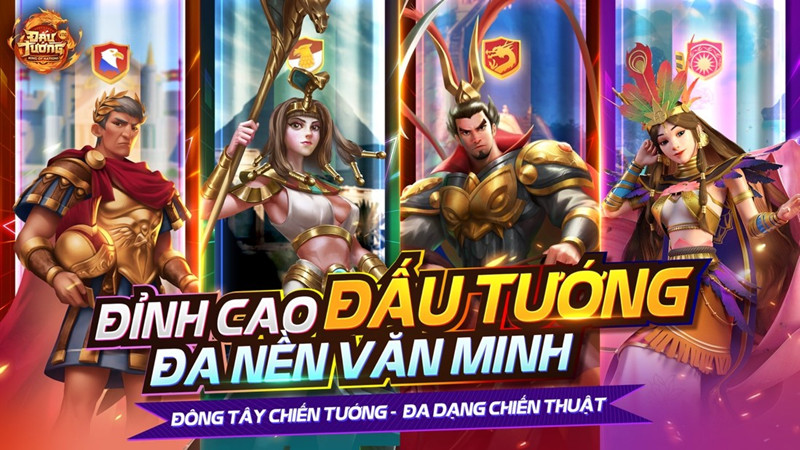 VNG General Battle is a multinational tactical general battle game that will “land” in the Vietnamese market on August 22. This game possesses a series of interesting features, promising to bring battles. Brainstorm and excited. Let’s explore those familiar features!

Excited from the first step of Crossing

At the beginning of the game, all VNG players will face the challenges that the game poses in the form of a pass. This is how the game conveys its story, and is also a guide to help gamers get acquainted with the main features. More specifically, when the lords successfully conquer each stage, they will receive valuable rewards such as equipment, crystals, general tickets, experience, … Thereby the lord can also search for materials and equipment. gradually upgrade the strength of the squad to prepare to enter more advanced features later.

Try your hand at the Tower of Trials

One of the advanced features of VNG General Battle is the Tower of Trials up to … 2000 floors waiting for players to conquer. By providing valuable resources for each level of increasing difficulty, this feature requires gamers to bring a suitable general formation to be able to occupy the top of the tower. It can be seen that conquering Thi Luyen Tower is a “long-term” goal and requires players to “plow” whenever possible.

Form a battle guild, compete in the Thunder Arena

When you are confident with your army, do not miss the Arena – where players can enter a more “brain balance” match with the squad of other players. On the weekends, the inter-server combat feature will be opened so that gamers can know their fighting strength compared to other lords on a larger scale. From there, gamers will receive countless Skill Seals and crystals to recruit and upgrade their forces based on rank after battle.

Join the Legion to conquer the challenge

But between players, there is not only competition. Because VNG Generals Battle is an online strategy game, in the process of playing, gamers will surely want to combine with teammates with the same interests and aspirations to conquer more arduous challenges in the game. That’s when the lords come together to form the Legion, participating in more interesting and challenging features such as the Legion Boss, the Lien Server War Corps or the God of the Realm. In particular, when any individual in the Legion achieves an achievement, the remaining members are not only “delicious” but also given gifts!

Build your own empire in the Territory

Solo gamers may not want to join the Legion, but certainly won’t want to miss out on the Territory. The feature provides a large but not great enough castle, and the player’s job is to add the missing buildings, upgrade what is already available to turn it into a solid rear, provide resources. endless abundance for his army. Thereby, gamers will enjoy the feeling of pride when seeing their fortunes change and develop daily, from desolate to bustling and prosperous.

Together towards the top through the God Realm War

Finally, there is the God of War feature. This can be considered the greatest war of the game, when all the most powerful Legions poured into the battlefield to make a career. Everything starts on a large war map with dozens of Temples and strongholds, all warlords can contribute their part to the overall victory of the Legion. Only the most powerful Legions, occupying the Temple of Heaven, and having the highest scores can participate in the Divine Realm of Conquest feature.

This feature does not gather as many players as God of War, but it will certainly be more fierce because of the strength of the warring parties. The four Legions leading the God of War will be put on a map with 4 castles and attack and defend depending on tactics – the Legion that survives to the end will win and become the God King. To get the exclusive benefits of this position, gamers must really focus on thinking carefully and coordinating with their legions.

With features that cover every aspect that a gamer looks for in an attractive and engaging tactical chess game, VNG Chess is really a good choice for those who are looking for a new experience. next time. The game will be released on August 22, so if you’ve ever dreamed of building a fortune, players should try this game to prove they can overcome all opponents and achieve success.