Dogs Moxie and Miley began an attack on the deadly snake right away.

Two dogs were caught on camera putting their lives on the line to prevent a deadly cobra from entering the house while a baby was sleeping.

Skye, a one-year-old child from Kidapawan City, Philippines, was asleep in her home when the poisonous snake invaded the front yard last Friday.

Moxie, a two-year-old white dachshund, dashed over to the snake and began pawing it, according to surveillance video. 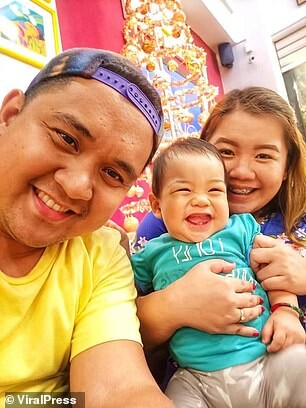 Two dogs sacrifice their lives to defend Skye, a one-year-old girl sleeping at a residence in Kidapawan City, the Philippines.

However, when Miley, four, detects danger, she makes a frenzied attack and captures the cobra in her jaws.

The snake then makes a beeline towards the front door, but the dogs work together to bite its tail and drag it away from the children’s toys and Skye’s sleeping place.

A two-year-old white dachshund is seen on CCTV. Moxie dashes over to the snake and begins pawing it, just as Miley starts a ferocious attack.

Miley died after being bitten by a cobra, which is one of the world’s most deadly snakes, and Moxie was blinded by its venom.

The snake stops moving and dies after a two-minute fight.

Miley died as a result of her injuries after being bitten by a cobra, one of the world’s most deadly snakes.

Moxie survived, but was left blind after being sprayed with poison by the snake.

Jaime Selim, Skye’s father, claimed he and his wife, Pause, were at work at the time, but their daughter was asleep at home with a babysitter.

He said: ‘My wife and I were out for work. When we arrived, our helper told us what happened and reviewed the cameras. We were shocked but also so proud of the dogs.’

Jaime added: ‘I can’t thank my dogs enough for protecting my baby Skye. We will miss Miley so much.’

Skye’s father, Jaime Selim, said: ‘I can’t thank my dogs enough for protecting my baby Skye. We will miss Miley so much’