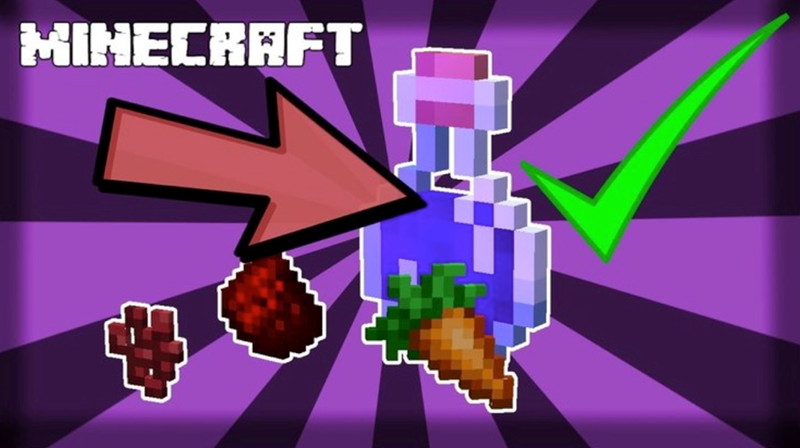 Defeating Warden in Minecraft 1.19 is a difficult task that can only be completed with a lot of preparation or traps.

Warden is the latest boss to be added to Deep Dark as part of update 1.19. It is the strongest mob in the game at the moment, with punches that deal 30 damage and a ranged attack that bypasses the shield. Therefore, it is very important to carry the right item to combat it.

In this article, JustbartaNews will introduce 8 useful items to counter Warden in Minecraft 1.19.

Healing potion is one of the most useful potions in the game, keeping the player safe in battles and exploring the world. Using this elixir at the right time can save your life from danger. There are 2 levels of this item that restores 4 HP and 8 HP.

Wardens can usually kill you with one or two attacks, so instant healing items can often give you a little extra time. To craft healing potions, players need awkward potions and sparkling melon slices. They can then add glowing rock dust to amplify its effect to level 2.

If you are slow to react and are afraid of being immediately knocked down by the Warden, using the Totem of Undying is a good idea. This immortal totem can save you in the worst cases.

Once activated, the Totem of Life restores half of its HP, removes all existing status effects, then grants Regeneration II 40-45 seconds, depending on version. The player also gains 5 seconds Absorption II and 40 seconds Fire Resistance I. Finally, an animation showing the totem of immortality will appear in front of the player’s screen.

Melee combat is not recommended because the damage Warden deals is extremely large. So a bow with Power V is a must-have. This is the main enchantment you need in order for your arrows to actually do damage.

Power increases arrow’s damage by 25% × (level + 1). Overall, the damage difference between levels I, III, and V is huge, especially in a Full Charge critical shot. This is why increasing Power is the most important thing you need to do outside of Infinity.

Items that are combined with Netherite are stronger and more durable than diamonds. Each diamond armor piece provides two durability points for a total of eight, while Netherite gives three points per piece of armor for a total of 12.

With Warden being the most dangerous mob in the game, you’ll need full Netherite armor if you want to kill this monster safely.

The enchanted golden apple is the most delicious food in Minecraft, the player will receive an amount of Hunger and Saturation points. To find the Enchanted Golden Apple, you need to find chests around the world in dungeons, mine shafts, desert temples, underwater ruins, fortress ruins.

While Hunger and Saturation are not very high, this also gives players a variety of buffs that are super useful in PvP situations in multiplayer servers. When eaten, the player gains 8 absorbing protection hearts, 1 fire resistance, 1 resistance and 2 regeneration. This is why this item is so useful when fighting bosses like Warden.

With the addition of Deep Dark to Minecraft 1.19, players can now explore the deep dark areas of the Minecraft world. The Deep Dark biome will have almost no light and the Warden boss can even make the surrounding area darker.

This is where the night vision potion comes in. Drinking this potion grants the player night vision for a specific amount of time. This works against Warden’s ability to allow the player to function normally in the dark.

Swift Sneak is a non-renewable enchantment that can be applied to leggings and allows the player to go faster while sneaking. It increases the player’s speed when crouching by 15% per level. At level 3 of Swift Sneak, the player’s crouch speed is 75% of their normal walking speed. This enchantment is very important if the player wants to avoid the Warden.

This is a spell exclusive to the Deep Dark biome. Players can only find spellbooks or Swift Sneaks in giant creepy structures in ancient underground cities.

Power-ups are the easiest method of increasing damage, allowing the player to destroy dangerous mobs while exploring. Players may need some extra damage if they’re going to attack the warden with a melee weapon.

The best thing about the power-up potion is that it’s fairly easy to craft, with the only requirements being a Nether Wart and a Blaze Rod. Players can create it immediately after arriving in the Nether.