Skip to content
Home Game 7 ways to help you travel the fastest way in Minecraft 1.19 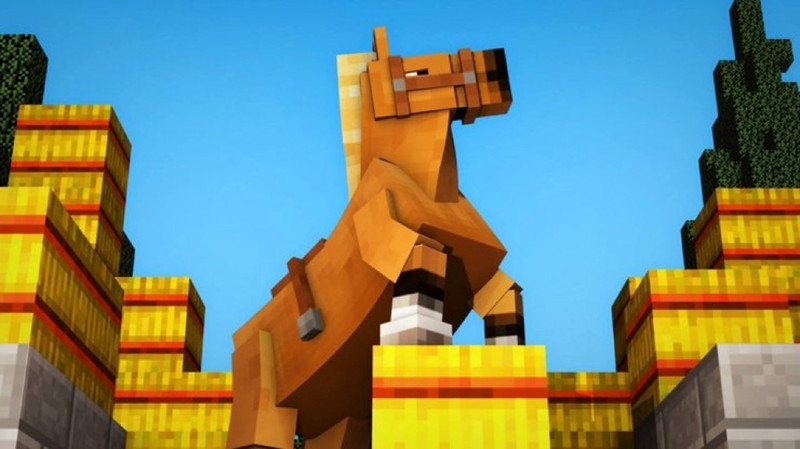 Moving far by foot is the most tedious part of Minecraft – players can overcome that in 7 ways below.

Minecraft is a large open world and players will spend most of their time moving around in the game. Because of the limited storage space, inexperienced players can take a long time to move to the farm.

In this article, JustbartaNews will list 7 fastest ways to go long distance in Minecraft 1.19.

This is probably the easiest method you can do right away in the early game. Horses can be found in plains and savanna biomes and can be tamed by mounting them until they produce heart particles.

However, the player needs to get the saddle from the chests in the village to control the horse.

Riding a donkey / mule and llamas

Donkeys are similar to horses, however, they are slower with better cargo handling. 15 additional slots allow players to gather more resources to transfer to their base. Players can breed donkeys with horses to create mules, they still retain the ability to carry chests but have higher speed.

Llamas are useless for moving from place to place, but they can carry a lot of items in chests. If players want to gather a lot of resources for their constructions, a llama convoy can definitely solve this problem.

Elytra Wings are a premium item that only spawns on the last ships, so they can be found hovering over the final cities. Those cities are located on the outermost islands, 1000 blocks from the central end island. The player can access the outermost islands through the End Gate, which is only accessible after defeating the Ender Dragon.

Elytra’s ability to fly depends on its durability, as it reduces by 1 point per second when dashing. a pair of Elytras deals 432 damage, equivalent to 7 minutes 12 seconds of dash. This makes it possible to fly about 10,000 blocks.

Minecarts and rails are probably one of the best vehicles for users to move around in the game. They can transport the player and your resources however, the player first needs to create a rail system from one point to another.

To create a longer rail system is extremely expensive – the player needs 6 iron ingots and a wooden tree to get 16 rails.

Electric rails require the player to farm gold instead of iron, and the player also needs an extra piece of redstone dust. These materials will help you create your own railway, as powered rails are capable of increasing the speed of a minesweeper moving in the direction it is traveling.

Sliding on the ice roads by boat is really one of the fastest methods of movement in the game. When boats are on any block of ice, they can be maneuvered as easily as if they were in water and can travel at tremendous speeds thanks to the slippery nature of the ice.

The speed of the boat can be changed based on the ice variant the player uses. Normal rock is the slowest, with middle rock and bluestone being the fastest picks.

The Nether Gate is really an easy way to teleport. The downside of this approach is that it is quite expensive. Players need a lot of resources to create various portals and connect them together.

Soul Sand is a special block in the Nether that slows the player’s movement speed. However, if they have a boot with soul speed, this debuff will be reversed. Players can move 61.5% faster on Soul Sand with Soul Speed ​​III (compared to normal ground movement).

Therefore, to do this, the player simply builds a 1-block wide path from point A to point B using Soul Sand/Soil and simply sprints on it with a speed increase of 60%.